Just some WIP pics of the Justicar, more pics soon... 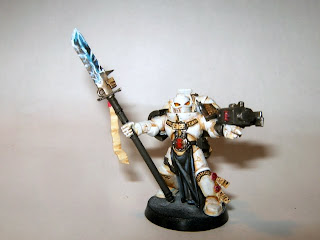 Robe is getting better i think? 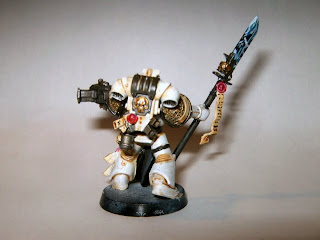 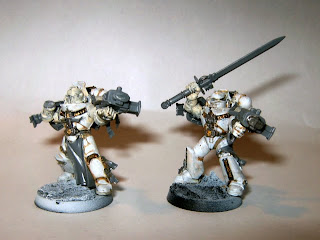 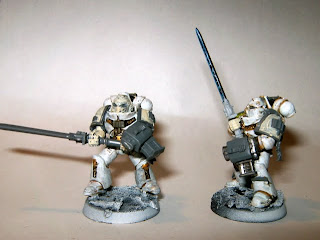 More strikes
Posted by JasoX at 20:51 No comments: Links to this post

Calm before the Storm

So, im mustering my forces to purge all xenos forces. At the moment my strike force have got some more troops. 4 boxes of grey knights, 1 box of terminators, dreadnought and librarian in terminator armour. I also looked at my old marines and purged all paint off them, maybe i use them or not - we will see.

Still thinking my color schemes, maybe i should go white/back combo? Some units main color white and minor black and vice versa in other? At the moment im going to paint some sample strike members. Stay tuned for pictures and stories.

Trying to convince my adversaries to start blogs about armies they are building, just Nids and Guard.
Posted by JasoX at 02:16 No comments: Links to this post

The Jericho Reach is a region of space long lost by Humanity. It has succumbed to darkness and barbarity, become infested by xenos, and is tainted by the Ruinous Powers. Laying close to the Galactic Eastern Fringe, the area known as the Jericho Reach was part of the Imperium in ancient days, and remained so for many millennia until it fell into an age of isolation, disintegration, and evil. One particularly significant discovery changed the region’s status: it contains a Warp Gate that connects two far-flung edges of the galaxy. Now, the Imperium once again dreams of making the Jericho Reach its own, but its attempted re-conquest has quickly become mired in blood and its hopes have turned into nightmares.

The Achilus Crusade is a war of re-conquest fought on three fronts. It is a savage war waged with every weapon that the Imperium possesses, and its commanders have sworn that it will not fail. In spite of such oaths, the Achilus Crusade may come to ruin. The Tau Empire has cast their desiring eye over the worlds and resources of the Reach and move with all force to make it their own. On worlds long forsaken by the Imperium, the slaves of the Dark Gods of Chaos reign and at the Reach’s heart, unsuspected at the Crusade’s outset, they have created a blasphemous domain ruled over by Daemon Princes and Chaos Lords, where the quixotic laws of the warp rather than those of fragile reality now hold sway. Perhaps even worse, from the depths of the untamed void the Great Devourer has risen; the Tyranids who would consume all within the Jericho Reach and leave nothing but carcass worlds spread amongst the ancient stars.

While the war between the forces of the Achilus Crusade and its many enemies rages, others with agendas far older than those of the Crusade move amongst the stars of the Jericho Reach. They have watched over these worlds and stars since before it fell into shadow. They are the Deathwatch: A unique division of the Adeptus Astartes, the Space Marines, bound together by ancient oaths and who stand the long watch against the greater darkness that is still to come. While the rest of the Imperium turned its face from the Jericho Sector after it fell, the vigilance of the Deathwatch has never wavered. In the long millennia of the Age of Shadow, they have stood sentinel from their Watch Fortress and scattered Watch Stations dotted across the fallen sector, sometimes the hunted but more often the hunter, a shadow within shadows. By their hands, many enemies of the Imperium have been denied and cast down amongst the Reach’s forgotten stars, and many great threats ended before they rose up to beset the greater Imperium of Man, unspoken of and unknown even to the Deathwatch’s distant masters. However, these battles have been but the prelude to the battles to come, for according to many, the true Time of Ending has come at last, and the final watch has begun. The Jericho Reach hangs in the balance—the intervention of the Deathwatch may be the only way to influence the outcome of the Achilus Crusade, for good or for ill.
Posted by JasoX at 03:10 No comments: Links to this post

Hour of the Deathwatch

My Wh40k army started as just regular grey knights. I ordered few boxes of the new stuff and cleaned my old metal characters. This is because my friend changed my mind going back to playing warhammer. I have been away something like 10-15 years and there have been many changes. First i looked if my favorite army would have codex, they didnt. Of cource i was looking for codex : alien hunters.

Back in the days of my active gaming i wielded custom space marine chapter called alien hunters, they used rules for dark angels in the codex : angels of death. Looking now, i clearly could not paint very well and models were ugly :D I really disliked the look of tanks back then, as i do now - even those modern marine tanks they are ugly. Only exception is the land raider. 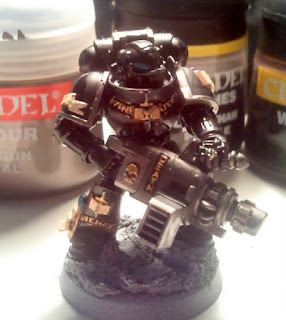 Still a WIP, need to paint that one arm silver - i totally forgot about that one. And paint some chapter logo on the other arm. Bases are going to be winter themed - that is aswell in WIP stage at the moment.
Posted by JasoX at 03:53 No comments: